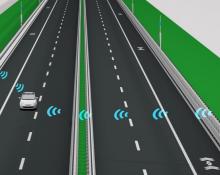 Anas’ goal is to lead our country towards the digital transformation of our infrastructure, in order to provide services that facilitate mobility and the monitoring of works, turning almost 3,000 kms of our network into Smart Roads, including the A2 “Autostrada del Mediterraneo”, which will be the first Italian smart road that will be able to interact with drivers for a more comfortable and safe journey.

In a world in which everything is increasingly connected to everything else, we know how important it is to invest in advanced technologies for roadways. The internet-of-things revolution that characterizes the 21st century  has helped develop many new tools and features that have become part of everyday life. But it  also has let to a “new” way of considering  road systems.

It is a fact that roads are a vital infrastructure that allow above-ground transportation. But now we also know that roadways can be innovated and improved with the technological advances that are being made in other fields . Anas is working exactly in this direction: Integrated Roadways.  Roads now are considered a candidate for smart technologies since they can provide passage for Internet of Things (IoT) networks, communication systems, data grids, electronic enclosures and a range of other technologies.

"Smart roads" are our future and they will significantly improve roadway safety by communicating with drivers throughout their journey, notifying them about  traffic and road conditions, warning them about potential emergencies or other issues ahead, helping them choose the safest, most efficient routes, and even contacting emergency services if they get into an accident or slip off a road.  These technologies applied to roads basically help secure and connect intelligent transportation systems, allowing vehicles, roadways, travelers, and traffic management centers to communicate with each other in real-time.

Another aspect that is being developed at an international level are “smart pavements” to make roadways much safer by imbuing the road itself with smart technology. The integrated Roadways’ concept involves substituting common asphalt paving with sophisticated, concrete slabs that give common roads or motorways the technological “ability” to detect nearby vehicles in real time and know where they are.

During 2017 we defined the key aspects for Smart roads by identifying innovative and technological solutions that will allow, through connectivity systems in motion, to cancel the distances between drivers and traffic management centers. The design developments focused on the identification of digital systems and platforms enabling Vehicle To Infrastructure (V2I) and Vehicle To Vehicle (V2V) communication.

Smart roads will also be equipped with innovative video surveillance systems such as drones that will allow to monitor the state of our road  infrastructure even in areas that are difficult to access with traditional means.  Thanks to the collaboration with Carlo Ratti Associati, the concept design of multifunctional poles and "Green Islands" has also been developed, which will allow the generation and distribution of energy from renewable sources, the recharging of electric vehicles, the recharging and the housing of drones.

On October 3 2018 Anas assigned works for the first phase of our Smart Road project on the A2 “Autostrade del Mediterraneo” for an investment of 1,8 million euro. These works on 30 kms of the A2, in the municipalities of Montalto, Tarsia and Rende, are part of a three year 20 million euro Framework Agreement for the A2 and the RA2 Raccordo Autostradale Salerno-Avellino.